Dhikr is the means by which Stations yield their fruit, until the seeker reaches the Divine Presence. On the journey to the Divine Presence the seed of remembrance is planted in the heart and nourished with the water of praise and the food of glorification, until the tree of dhikr becomes deeply rooted and bears its fruit. It is the power of all journeying and the foundation of all success. It is the reviver from the sleep of heedlessness, the bridge to the One remembered.

The shaikhs strive to remember their Lord with every breath, as the angels are always in the state of dhikr, praising Allah. One of our shaikhs said, “I remembered You because I forgot You for a moment, and the easiest way for me is to remember You on my tongue.” If the seeker will mention his Lord in every moment, he will find peace and satisfaction in his heart, he will uplift his spirit and his soul, and he will sit in the Presence of his Lord. The Prophet (s) said in an authentic hadith mentioned in Ahmad’s Musnad, “The people of Dhikr are the people of My presence.” So the gnostic is the one who keeps the dhikr in his heart, and leaves behind the attachments of the lower worldly life.

Mention of Dhikr in the Qur’an.

Dhikr is mentioned in many places in the Holy Qur’an, and in most verses, what was meant by the word dhikr is tasbih, glorifying; takbir, exalting; tahmid, praising; and praising and praying upon the Prophet (s).

He said in Surat ali cImran, 41, “…and remember your Lord much and glorify Him in the evening and in the early morning.” And again, 191, “Those who remember Allah while standing, sitting, and lying on their sides…” [3:41, 191]

There are many, many other verses of Qur’an mentioning dhikr. Imam Nawawi said in his book, “Futahat ar-Rabbani cala-l- Adhkar an-Nawawiyya,” vol. 1, p. 106-109, “All scholars of Islam have agreed on the acceptance and permissibility of Dhikr by heart and by tongue, for the adult men and women, for children, for the one who has ablution, and for the one without ablution; even for the woman during her menses. Moreover, dhikr is allowed by all scholars in the form oftasbih, tahmid, takbir and praising and praying for the Prophet (s).”

Dhikr polishes the heart and is the source of the Divine breath that revives the dead spirits by filling them with the Blessings of Allah, decorating them with His Attributess, and bringing them from a state of heedlessness to the state of complete wakefulness. If we keep busy with Dhikrullah, happiness and peace will be granted to us. Dhikr is the key to happiness, the key to joy, and the key to Divine Love.

Mention of Dhikr in the Sunnah

Bukhari narrated in his book from Abu Huraira that the Prophet (s) said, “Allah, Almighty and Exalted, has angels who seek the people of Dhikr. If they find the people of Dhikr they encompass them until they reach the first heaven. And Allah asks his angels, ‘What are my servants doing?’ The angels say, ‘O Allah, they are praising You and glorifying You and they are making Dhikr.’ Allah says, ‘Did they see Me?’ The angels answer, ‘No, they didn’t see You.’ Then Allah asks, ‘How would it be if they were to see Me?’ The angels reply, ‘O Allah, if they were to see You, they would be making more praise of You and more glorification of You and more Dhikr of You.’ And Allah asks ‘What are they asking for?’ The angels say, ‘They are asking for Your Paradise.’ Allah asks, ‘Did they see My Paradise?’ The angels answer, ‘No, Our Lord.’ Allah continues, ‘How would it be if they saw My Paradise?’ The angels reply, ‘They would be more attracted and more eager to reach it.’ Then Allah asks them, ‘Of what are they afraid?’ And the angels say, ‘They are afraid of hellfire.’ and Allah asks, ‘How would it be if they saw my Hellfire?’ and they reply, ‘They would be running more and more away from it and asking more and more protection from it.’ Then Allah said,’ I am making you all My witnesses: that I am forgiving them of all their sins.’ Then one angel asked, ‘O our Lord, there is among these people one who is not from them, he came only to ask for something from one of them.’ Allah said, ‘Those are my beloved ones who are making My Dhikr. Anyone who comes into their circle will be forgiven, and I am forgiving him.’”

In Bukhari and Muslim it is narrated from Abu Huraira that the Prophet (s) said, “As my servant thinks about Me so will I be for him. I am with him if he will remember Me. If he calls on Me in himself I will call him in Myself, and if he calls on Me in a group of people, I mention him in a better group in My presence. If he approaches Me one handspan, I will approach him one arm’s length; if he approaches Me one arm’s length, I will approach him by a cubit; if he comes to Me walking, I will come to him running.”

Tirmidhi and Ibn Majah narrated on the authority of Abi Darda that the Prophet said, “Do you want me to tell you of your best deeds, and the most honored and praised and sanctified to Your Lord, and the highest in its reward; better than spending gold and better than meeting your enemy and cutting their necks in the jihad?” They said, “Yes, Ya Rasulallah.” He said, “Dhikrullah.”

The Prophet (s) said, “Everything has its polish and the polish of hearts is dhikrullah.”

Mu’adh bin Jabal (r) said, “Nothing saves you from Allah’s punishment except Dhikrullah.”

There are many, many other hadith about the benefits and blessings of Dhikr such that it is impossible to quote all of them here.

From the Sayings of Imams and Scholars about Dhikr

Ibn cAbbas (r) said “Allah, Almighty and Exalted, put a limit on all the obligations that He ordered human beings except for Dhikr. For it there is no limit.”

Ibn Qayyim al-Jawziyya said in his book, Al-Wabil as-Sa’ib, p. 52, “There is no doubt that the heart oxidizes, just as copper and silver oxidize. Its polishing is the dhikr, which will make it like a white mirror. The oxidation of the heart is due to heedlessness and sin. Its polishing is by means of two actions: repentance and dhikr. If someone’s heart is cloudy, the reflections of images will be unclear, he will see falsehood as truth and truth in the image of falsehood (batil). When there is too much oxidization on the heart, the heart will be darkened, and in the darkness the images of the Truth and Reality never appear. The best way to polish it is through Dhikrullah.”

Ibn cAta’illah as-Sakandari said, “By Dhikr you leave behind heedlessness and forgetfulness, and you keep your heart Present with Allah, Almighty and Exalted. The best way to approach His Presence is by reciting the name ‘Allah,’ in the heart or on the tongue, or by reciting any of His Names.” [Miftah al-Falah, p. 4]

Abul Qasim al-Qushayri said, “Dhikr is the strongest support in the way of Allah, ‘Azza wa Jall. No one can reach the Divine Presence except by continuing to recite Dhikr.” [Risalat al-Qushayriyya]

Mulay al-cArabi ad-Darqawi said, “Do not say, ‘I am nothing’; neither say, ‘I am something.’ Do not say: ‘I need such and such a thing’; nor yet: ‘I need nothing.’ But say: ‘Allah,’ and you will see marvels.” [Letters of a Sufi Master]

We see from what has been mentioned that all guides and perfect shaikhs advised the seeker in the Way of Allah to make continuous dhikr in all states of their lives and to keep the company of the people in associations of Dhikr. We see that the Holy Qur’an and the Sunnah of the Prophet (s) and the scholars are all in accordance on this matter.

The Types of Dhikr

Bukhari narrated in his book of hadith, that Ibn ‘Abbas (r) said, “In the time of the Prophet (s) the people used to raise their voices in Dhikr.”

Imam Ahmad, Abu Dawud and Tirmidhi related that as-Sa’ib (r) preported that the Prophet (s) said, “Jibril came to me and ordered me to order my Companions to raise their voices in takbir.”

Allah mentioned in Surat al-Acraf, 205, “And remember thy Lord in thy self with humility and fear, and without loudness of speech, in the mornings and evenings; and be not of the neglectful.” [7:205]

Imam Ahmad narrated, “Abu Huraira reported that the Prophet (s) said that Allah says, ‘I am with my servant when he remembers Me and by his remembrance of Me his lips move.” Commenting on this hadith, Imam Nawawi said, “Allah is with the one who remembers Him and calls Him in his heart, and calls Him on his tongue, but we must realize that the dhikr of the heart is more perfect. The rememberer made dhikr of the tongue in order to reflect the occurrence of the dhikr in his heart. When the love of Allah and His Remembrance overwhelms the heart and the spirit, the tongue is moved and the seeker brought near.”

Sheikh Amin al-Kurdi said in The Enlightenment of Hearts (Tanwir al-Qulub) p. 522: “The dhikr by tongue, which combines sounds and letters, is not easy to perform at all times, because buying and selling and other such activities altogether divert one’s attention from such dhikr. The contrary is true of the dhikr by heart, which is named that way in order to signify its freedom from letters and sounds. In that way nothing distracts one from his dhikr, as the poet says:

With the heart remember Allah, secretly from creation, wordlessly and speechlessly.

That remembrance is best of all: out of it flowed the sayings of the saints.

“Something that confirms this was narrated on the authority of cA’isha (r): ‘Allah favors dhikr above dhikr seventyfold (meaning, silent dhikr over loud dhikr). On the Day of Resurrection, God will bring back human beings to His account, and the Recording Angels will bring what they have recorded and written, and Allah Almighty will say: See if something that belongs to my servant was left out? The angels will say: We left nothing out concerning what we have learnt and recorded, except that we have assessed it and written it. Allah will say: O my servant, I have something good of yours for which I alone will reward you, it is your hidden remembrance of Me.’ Bayhaqi narrated it.

“Also on the authority of cA’isha: ‘The dhikr not heard by the Recording Angels equals seventy times the one they hear.’ Bayhaqi narrates it.” 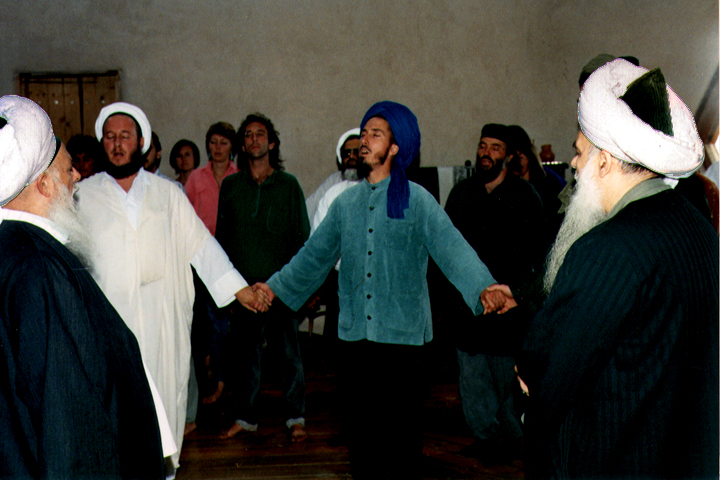 Die Before You Die

The Prophetic Title “Best of Creation”

How a Derwish may be acceptable to Allah Almighty?

Love Is The Water Of Life

Who Likes To Eat The Flesh Of His Dead Brother?

About the Most Distinguished Naqshbandi Sufi Way

The Principles of the Naqshbandi Way

Beware! This Is the Era of Mahdi (as)

ABOUT US
This site includes teachings, practices and events of the Most Distinguished Naqshbandi Sufi Order which is led by Qutub Mutassarif, Sultan al Awliya Mawlana Shaykh Hisham Kabbani, leader of the Tariqah and his representative Shaykh Nour Kabbani.
Contact us: contact@sufinyc.com
FOLLOW US
© Sufinyc 2019
MORE STORIES

I Need A Guide